Launched by the Paul Hansell Foundation during Mental Health Week, the #ConvoPlate initiative features distinctive and individually numbered #ConvoPlate plates designed to create awareness and stimulate conversations, about mental health, with an emphasis on prevention. Individuals receiving a plate are asked to start a conversation about mental health by posting on social media (using the hashtag #ConvoPlate), and then pass the plate along. The Foundation hopes that as each plate passes to someone new, mental health organizations receive financial support.

But students in Ms. Buchmann’s Senior Drama class have taken things one-step further. In an effort to amplify their voices, the students have created the #Rick2KLDCS campaign. Through this campaign, they hope to grab the attention of CBC personality Rick Mercer and get him to come to Kirkland Lake to accept the #ConvoPlate. The students are targeting Mercer because they want to draw a lot of attention to the campaign. They believe that IF they could get him here, it will show people in their small community what can happen when we work together and believe in something.

“If we shoot what seems impossible and we’re not successful – the worse that happens is we make a lot of noise and bring attention to something that is important to us. Can’t go wrong,” says Alexa Morgan, a student in Ms. Buchmann’s class

These students are presented play called Wooly’s Umbrella. Written by Elizabeth Hill, the play is about a character (Wooly) who lives in a remote northern Indigenous community and is struggling with her mental health as a result of her experiences in a residential school.

“Being a part of Wooly’s Umbrella has taught me to be more aware of issues in communities near us.” Says Abigail Haskell, a student who plays Dr. Morgan. “Mental Health isn’t really talked about. Especially among teenagers—it is so important to have this conversation and for people not to feel ashamed.”

The goal of the play is to help the audience realize that dealing with mental health is not as simple as it appears. It emphasizes the importance of reaching out and talking, not just to professionals, but to family members and friends as well.

“We started a dialogue that needs to continue. We can’t sit in silence,” says Matthew Paquette  a student who played Magwa

About the Paul Hansell Foundation:

The Paul Hansell Foundation was founded after the Hansell family lost Paul to suicide in December 2010.

The Foundation’s mission is to promote programs aimed at the mental and emotional wellbeing of youths. Its vision is that mental health is a natural part of everyday conversation. Through education and awareness the foundation aims to break down barriers and establish a proactive and preventative dialogue that puts mental health on an equal footing with all other forms of health.
https://www.paulhansellfoundation.com/

Other Media Pick Up About the Plate: 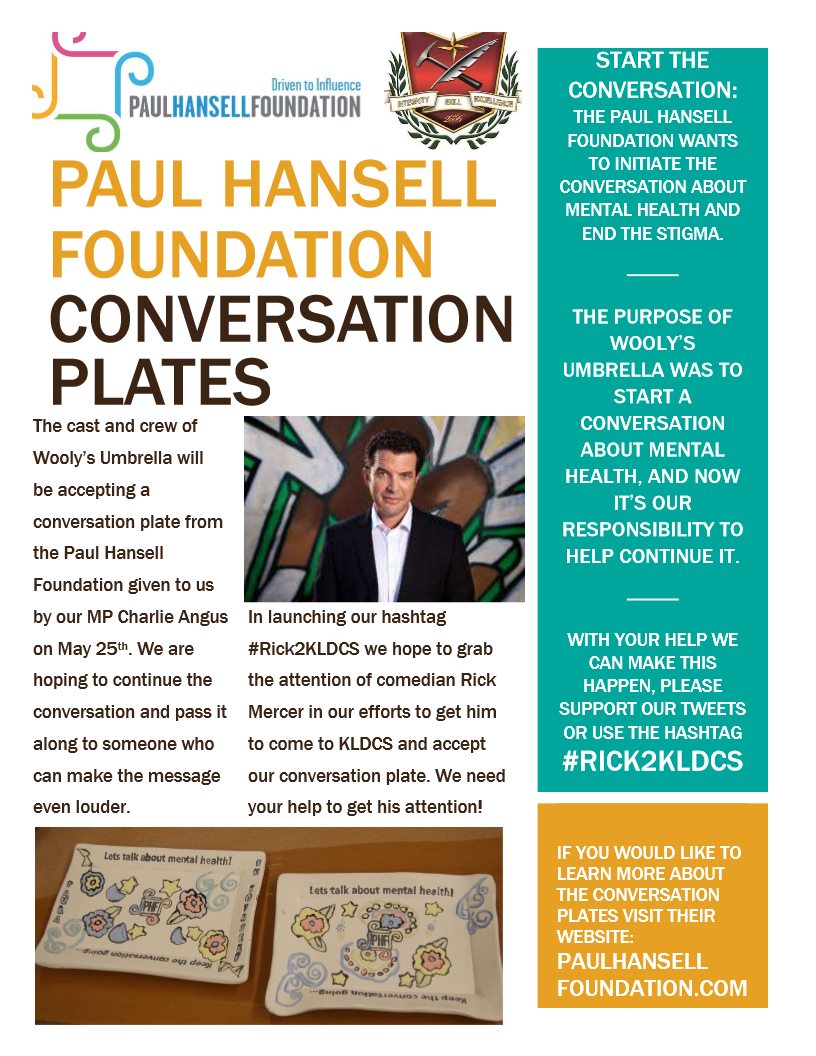